This is a reblog of a post that I wrote for RhetComp@StonyBrook, a blog that I started and facilitated for a year (2013-14) for the Program in Writing in Rhetoric at my university.

Part I: The Big Picture

Moving from one academic context into another, including in the case of academic disciplines and even levels, can be challenging for any student. But transitioning from the educational culture of one country to that of another altogether can add a whole new set of difficulties. In this post, I would like to highlight how significantly difference in educational practices affect international students’ academic transition and success. Continue reading

In the first part of this post, I highlighted some general difficulties that international students face during their academic transition, focusing on the challenge of understanding/implementing new ideas, assumptions, and approaches about learning and teaching in a new academic system/culture. Originally written for writing instructors (but relevant for any professors), this follow up entry offers specific suggestions for helping int’l students with learning writing in particular and with their academic transition and success in general.

“I am yet to make it,” said a scholar at a regional public university, referring to the doctoral dissertation he wanted to complete. “It’s very difficult to find time.” The word “banaune” in his sentence struck me because one doesn’t really sit down to somehow “make” a dissertation. It also reminded me of various recent conversations—and questions—about the “production” of scholars with advanced degrees, or dangling the “Dr.” title in front of their names, as many scholars themselves cite as the reason to get the degree.

Advanced degrees require extensive research, such as for the master’s and doctoral theses, and these projects demand extensive review of current and relevant knowledge in the discipline, intellectual positioning and proposition of new ideas on the topic of choice, collection and analysis of primary and/or secondary data, and problem-solving or theorization from the research. Some disciplines also require the presentation of new models or methods, designs or products, as modes of advancing new knowledge. As such, while graduate degrees are a means for advancing new knowledge, they also require institutions to provide their students and scholars the foundation of skills for problem-solving, presenting new ideas, and learning through experience and experimentation at the undergraduate level. Unfortunately, we have neither the foundation nor structure we need as yet. Continue reading 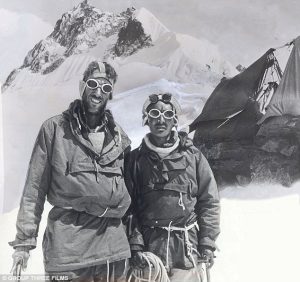 I was recently participating in a webinar about a MOOC-style first-year writing course, and a few words kept confusing me. Content. Delivery. Scale. . . .  Especially the last one stops me in my tracks.

When Tenzing Norgay Sherpa and Edmund Hillary climbed Mt. Everest for the first time, they weren’t doing numbers. They were undertaking a superhuman challenge. It was a qualitative matter. It was a matter of inspiration. Making the impossible accessible. Showing that someone could actually do it. Redefining success. “Because it was there.” It, the mountain that had killed countless people for trying. They were scaling the un-scale-able.

“The real value add[ed] of higher education,” says Joshua Kim, writing on Inside HigherEd,  “cannot occur at web scale. It can only occur at human scale.” That scale occurs “where a skilled and passionate educator interacts directly with a student to guide and shape their learning.” As Kim adds, in an article meant to debunk myths and criticism of open, at-scale online education (not a critique of it), “[o]pen online courses at scale expose just how valuable, essential, and irreplaceable are our tight-knit learning communities. Never before has the teaching efforts of a gifted, knowledgeable and passionate instructor . . . been as valuable and as essential.” Online education at scale has to somehow find ways to substitute one-on-one and/or face-to-face human interaction, decreasing the time and attention given by an educator to learners who can ask questions, feel the presence. In a writing class, only some things can be scaled without fundamentally compromising learning. Continue reading

For any colleagues who can spare a few minutes about my first major field research-based book project, which is about how American universities support international graduate students with their academic transition and success, here are a few notes.

First, here is the brief blurb that I sent to the publisher:

Using qualitative data collected from more than twenty universities across the US, Writing Support for International Graduate Students describes and theorizes agency- and advocacy-driven practices, programs, and policies that are most effective in helping international students learn graduate-level writing and communication skills. It uses compelling narratives and cases to illustrate a variety of program models and support practices that fostered the students’ process of academic transition and success. Employing an ecological framework, the book seeks to advance academic conversation about how writing scholars/instructors and program administrators, as well as other academic service professionals working with this student body, can formulate policies, develop programs, and implement practices that best help these students grow as writers and scholars in their disciplines.

Here is a brief excerpt from proof copy.

This post is based on parts of the preface to my book on international graduate students.

Since I had landed in the city of Louisville in Kentucky about a month earlier, along with my spouse, in fall 2006, I had been feeling as if my ability to navigate any physical space and social system had somehow become impaired. From finding transportation for getting to essential places to figuring out a way to call home, and from understanding basic academic concepts and practices like “course registration” to reading about “tutoring” at the writing center (where I would start working), every step in the transition process had been overwhelmingly new.

But when classes began, I had started feeling more comfortable. As I walked into the third and final class meeting of the second week, I was actually feeling jubilant about a grand achievement I had just made, albeit largely out of luck. Having learned about something called the Student Housing Office earlier that week, I had visited it and been offered an on-campus apartment where a student had just vacated a unit (a rarity at that point in the semester, I was told). Moving into a building that was well furnished and located right across from the Writing Center where I had started working as a tutor was a relief for an international student who came from the Nepalese capital city of Kathmandu, an overcrowded place where basic amenities were becoming increasingly inaccessible after a violent conflict for a decade and dramatic internal migration. So, having taken care of accommodation, transportation, work permit, and the like, I was truly ready to enjoy the university as an MA student and teaching assistant in English and Writing Studies.

English, most of us believe, is an “international language,” one that offers greatest economic opportunity for everyone, as well as tremendous cultural capital and connection to the “whole world.” Facts related to these claims are a little more complicated, as I will follow up in the next essay; in this one, let me describe a few historical and geopolitical dynamics behind the above assumptions.

English has an interesting political history in Nepal. Although English speakers had reached the region in late 1700s, the rulers of a nation that was being established started learning “Angreji” as they developed a love-hate relationship with British colonizers in India in the mid-1800s. So, English facilitated geopolitical power struggles in the region, especially when Nepal’s rulers supported British colonizers during the 1857 Indian Mutiny, in exchange for favors related to national sovereignty and suppression of democratic forces at home. Similarly, while a permanent residence for a British envoy was established in Kathmandu in 1792, the language entered formal education when the first “modern” and also English-medium school, Durbar School, was established in 1853. The school was only meant for children of the ruling class, since the Shah-Rana regime (1846-1951) wanted to keep the country politically isolated from the world outside. But more and more people around the autocratic rulers kept learning it as a means of privilege and power.

In a striking case of politicization of English, the ultra-nationalist Panchayat regime tried and failed to make it inaccessible to the public. King Mahendra’s national education policies attempted to enforce a Nepali-only language policy, seeking to ban English while also destroying other local languages rather callously: “If the younger generation is taught to use Nepali as the basic language,” said the Nepal National Education Planning Commission of 1956, “then other languages [of ethnic minorities] will gradually disappear, the greater the national strength and unity will result. . . Local dialects and tongues other than Nepali should be vanished [banished?] from the playground as early as possible in the life of the child.” In fact, the regime used the national census to show the number of languages in Nepal declining from 44 in 1952 to 17 in 1971 (as we know, there are more than ten dozen languages now). Continue reading

If the society has punished public institutions for their sluggishness, it will punish private colleges for the shallowness of the education they provide.

When I finished high school in the early 1990s, I looked up to an older cousin as one possible role model. He had an “intermediate” degree and proudly taught at a primary school. Two decades later, when his son dropped out of college and went abroad to make money, along with many of his peers, I found it shocking that the new generation didn’t pursue more education than ours.

Years later, I learned that there is nothing surprising about new generations deciding to skip college or to get a different kind of education. While fewer students than in the past are going to college in some countries, in others, their proportions are changing by gender, class, region, and so on.

Students also move back and forth between the public and private sectors, which is the focus of this essay. Continue reading

“Throw fast na”, said a teenager to another at the school I first started teaching, back in the mid 90s. “You ta what-like, what-like playing, yaar.” After listening to students in the playground for a while, I realized that they were actually speaking a certain type of English (teachers had to police and punish if they didn’t). I later learned that linguists call such language “pidgin”, a rudimentary means of communication developed by enslaved or colonized people, especially when they are isolated from other speakers or are prohibited against speaking their native language with each other.

The current educational condition in Nepal, where more and more children are forced to use pidgins like the above, is a dangerous social experiment. Just to be clear, English is an extremely important world language; but how we realize our “English dreams” is just as important.

In the last piece here, I described the historical/political dynamics behind the widespread belief that English is a global language that promises everyone greater economic opportunity and social advantage. Continue reading

Why Visions to “Educate the World” are Absurd

This essay was published by the Chronicle of Higher Education in July 2013. Since the original link is broken, I’ve posted a copy here. 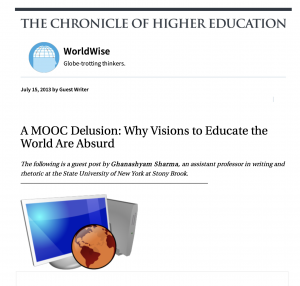